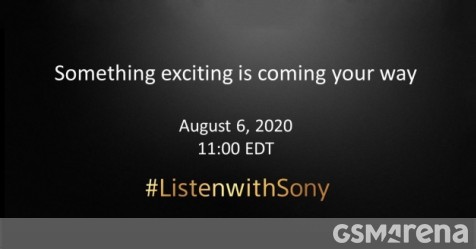 Sony confirmed it’s hosting an audio-related launch event on August 6 where and it’s highly likely we’ll see the debut of its WH-1000XM4 headphones. The keynote is scheduled to kick off at 3 PM UTC and Sony is boasting a #ListenWithSony slogan which confirms the product (or products) will be audio-oriented.

Save the date 👉 8.6.2020 👈 Join Sony Electronics’ Live Stream event to watch the unveiling of our latest innovation. #ListenWithSony https://t.co/gLe9EF1hUC pic.twitter.com/9I6Q3DJiEg

Back in June, we saw a listing for the XM4 headphones, which revealed they will feature minor updates to the already excellent WH-1000XM3s. The new additions will include AI real-time upscaling of compressed music files. The headphones were also spotted in Brazilian listing which revealed their design is visually indistinguishable to their predecessors.

Photos and the manual of the Sony WH-1000XM4, the successor to Sony’s excellent XM3 Bluetooth wireless headphones, just went up on Brazil’s Anatel (equivalent to the FCC).

In addition, we got confirmation the XM4s will retain the 40mm Liquid Crystal Polymer (LCP) drivers, class-leading Active Noise Cancellation (ANC) and 30-hour battery life. Pricing is expected to remain at $348.