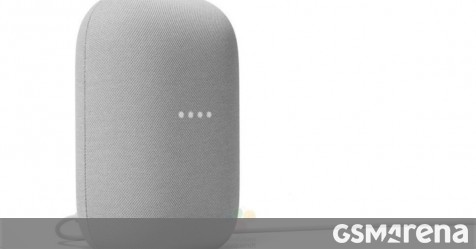 Back in July, Google teased a new Nest Home smart speaker – one that’s meant to succeed the original air freshener Google Home speaker. The new smart speaker, along with a new Chromecast with Bluetooth remote is expected to be announced at a September 30 event.

A set of official renders of the Nest Home has leaked thanks to @rquandt via Twitter and WinFuture.de. The renders show two Nest Home colors which might be called “chalk” and “charcoal”. With these renders, we’re given more angles of the speaker, along with a view of the power cord, which seems to have a new proprietary plug.

The front of the speaker has the four-LEDs that light up when you talk to it, and there’s a mute switch on the back of the unit with a small “G” logo as well. As with other Nest Home devices, we anticipate it will have some touch-sensitive areas for volume adjustment.

Here’s the 13 second video they shared with us. pic.twitter.com/TMw9HSeSbC

On September 30, Google will hold an event where it will announce the Pixel 5, Pixel 4a 5G, a new Chromecast device, and the new Nest Home speaker. The event will kick off at 11AM PT. The Pixel 5 is expected to resemble the Pixel 4a in design but with better specs. It could come with 8GB of RAM, a 90Hz display, and a new ultrawide camera on the back.