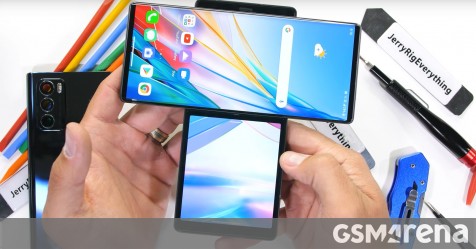 LG is an innovative company that prefers to forge its own path – while others are pushing foldable designs, the LG Wing comes with an out of the box swivel design. The mechanism rotates the large 6.8” display to reveal a secondary display.

When opened, the phone forms a perfectly symmetrical T shape. How does that work? Let’s watch Zack from JerryRigEverything take it apart to find out.

This design has some unique challenges. LG used a kind of lubricated plastic to ensure the swivel motion goes smoothly. Also, the two halves are slightly concave creating a void, which prevents any dirt and sand getting caught between the halves from being dragged along and scratching the secondary display.

LG has tested the Wing’s swivel mechanism and says it will survive at least 200,000 cycles. The mechanism itself uses an O-shaped hinge that allows a ribbon cable to pass through the middle and power the main display.

One spring helps the top half fully rotate 90° when opening, then another spring helps you close the wing. Interestingly, there’s a tiny hydraulic damper that smooths out the motion.

Note that the phone that Zack tested is a pre-production unit, expect a traditional durability test video when LG sends him a retail unit.