With the second quarter well behind our backs, reports from analysts start pouring in. Yesterday Canalys reported that Huawei surpassed Samsung and took the top step, and today two other agencies confirmed the lead switch – Counterpoint Research and Omdia.

According to both, Samsung was affected the most by the COVID-19 pandemic and subsequent lockdowns, its sales going down over 25% on a yearly basis. In the same time, Apple was the only major player to increase shipments both on a quarterly and yearly basis.

Omdia’s numbers also show Tecno growing, while the rest of the top 10 all saw decreasing shipments compared to Q2 of 2019. On the other hand every company bar Samsung and Realme managed to improve on its Q1 numbers.

Varun Mishra of Counterpoint said the market in China performed better and accounted for 31% of all global sales – a number that was last seen three years ago. Looking into details, companies took the biggest hit in April, with shipments gradually improving in May and June – India even managed to get to pre-COVID levels in June. 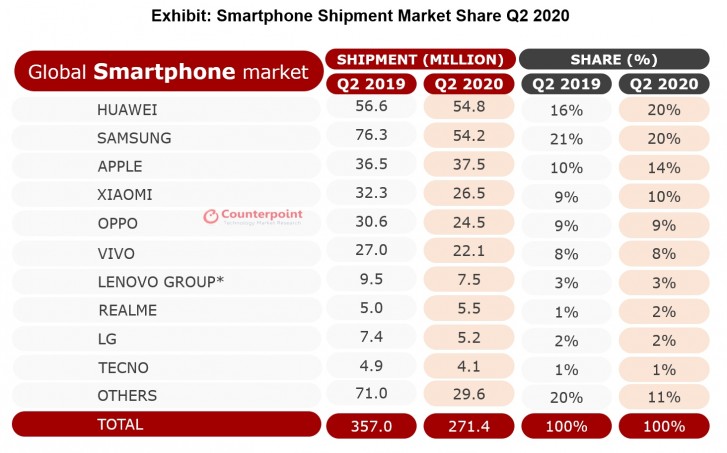 Counterpoint Research offered a detailed look into the 5G market as well. Demand for LTE phones has declined, but interest in the next-gen devices has increased. Overall penetration is now 11% (from 7% during Q1 2020), with China being the main driving force behind the change. Abhilash Kumar, an analyst at Counterpoint, confirmed the growth “is being pushed by attractive 5G plans from operators and availability of mid-tier 5G smartphones from several brands”.

Omdia expects user purchasing behavior to be highly influenced by the strides made in fighting the outbreak and containment of the subsequent threat of new outbreaks. Some countries that looked like they contained COVID-19 are now recording uptick in positive cases, and that might negatively affect sales in the remaining two quarters of 2020.